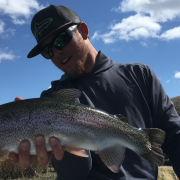 The Tetons received over 400 inches of snow this year, which is really good news for our western rivers.  Lots of snow in the mountains leads to better habitat for both aquatic bugs as well as trout!  Pre-runoff, we had some really great days dry fly fishing on The Snake.  Midges were out in full force throughout much of March, and with some beautiful days in the 40s and 50s, there wasn’t a better place to be than the river.  Although the water became muddy about a week ago, cooler weather over the last couple of days has cleared the water up a bit, allowing us to get back out on The Snake.  If you are looking to get out and do some dry fly fishing, don’t be afraid to throw some big foam, skwala patterns between 1 and 5 pm, or during the heat of the day.  Remember, skwalas aren’t flyers, they swim.  Get that foam twitching and be ready for some nice cutties looking up!  If you are looking for a guide to get you out on the water, don’t hesitate to call.  Our staff is more than excited to be up and running for the season!  Tight lines!” 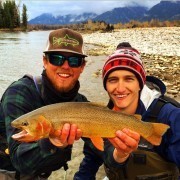 Fishing on The Snake River is still going strong.  Unseasonably warm temperatures and sunny days this mid October have provided us with some phenomenal fall fishing.  The water releasing out of the Jackson Lake Dam has settled to our wintertime flows, and the fish are fired up, putting on the pounds for our long winter here in Jackson.  Our guides are still finding fish looking up for blue wing olives on slow flats and riffles.   In between these spots, we are still finding fish eating big foam dry flies as well as small dropper dries and nymphs.  We hope this nice weather and good fishing continues for a bit longer, allowing us to get more days on the water!

The best fishing of the year is upon us.  Nights are cool, the days are hot and the Cutthroat know that winter is just around the corner.   Guides are reporting that the fish are keying onto smaller patterns.  Where size 10-14 parachute adams and similar ties have been the ticket, its time to go smaller.  Best success will be found with size 16-18 flies.   If conditions warrent these smaller patterns can be tied behind another larger bug.  The bigger fly is up for depate as some are using size 14 dries while others are throwing big foam attractors up front.  Flows are to continue through the week with the first scheduled reduction being October 1st. 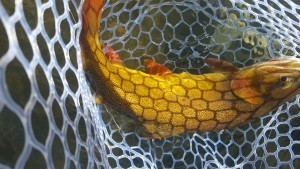 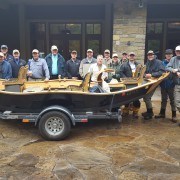 Every year this crew makes its pilgrimage to Jackson Hole in September for the best fishing of the year.  Even though they timed some cooler wet weather this year the Insulate America team fished it hard every day and crushed it on streamers and on size 10-14 mayflies. 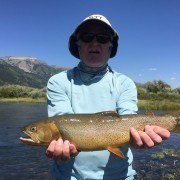 The dry fly fishing on our private access to Fish Creek continues to be extremely productive. Longtime GFA client, Rod Moorhead, had a spectacular day and landed some real pigs all on the surface. 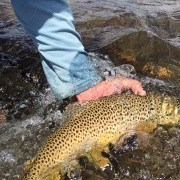 With continued cool temperatures throughout the Teton area, the fish have remained active, and the fishing productive.  The dry fly fishing has been exceptional in the mornings and late afternoons.  We have experienced a lull in the action from 2-4 pm, however, getting down and dirty with double a nypmh rig is still producing!

The dry fly fishing on the Snake is consistent throughout the day.  Our guides have reported that Chubby Chernoybl’s (size 8-12) in gold, orange, and purple have been producing from Moose to the canyon.  The key is fishing these right next to the bank and in slower water adjacent to seam lines.   There has been a productive mayfly hatch throughout the afternoon, and using a classic parachute Adams (size 12-18) has been the ticket!  If you haven’t tried the UV2 Para-Adams (size 12-18) we would definitely suggest adding a couple to your fly box.   As for a double nymph rig, the tried and true rubber legs followed by a red copper john/flashback pheasant tail/lightning bug continues to work well.  If you are fishing from Moose to Wilson we would highly recommend using a Two Tone Stone in a size 6 or 8 instead of a rubber legs.

The rio verde has been a fickle beast as of late.  If the sky is overcast be prepared for great dry fly, nymph, and streamer action, however, conversely during blue bird days be prepared to throw your entire fly box as the fish are very fickle.  Chubby Chernobyl’s with segmented (black/white) legs have been doing exceptionally well.  Trailing a bead head pheasant tail (size 8-12) will definitely work well when the top water action slows down.  As for streamers: a classic yellow sex dungeon, swimming jimmy, and bad boy in yellow have all been producing well.

The South Fork of the Snake Idaho:

The salmon fly madness is finally over on the South Fork, so the river will be noticeably less busy.  Top water action is still very productive throughout the day, with the height of the hatch occurring from 4-8pm.  Throughout the day a circus peant/water walker in size 6-8 have been productive.  A good trick to entice fish to strike is giving your water walker/circus peanut some movement. Fishing a PMD cripple or emerger in the riffles has also been extremely fantastic.  Try mixing up your PMD from yellow to cream/pink.  The streamer action picks up considerably from 8ish to dark.  As light fades go from dark colored streamers (black and olive) to light colored flashy streamers (orange, yellow, white).

Don’t let this little respite of cool weather and rain dissuade you from going fishing! Many of the local rivers are fishing extremely well.

The Snake River:
The Snake is fishing very well from Moose to Wilson and from Hoback through the canyon. Top water dry fly action has been productive with chernobyls in any color (size6-12) and a variety of mayfly imitations (parachute adams, purple para wolfs). Ants and beattles have been productive during the later parts of the afternoons. If the water looks like it should be holding fish it most likely is! If you happen to be on the water during one of the rain storms that have been blowing through as of late get down and dirty with some nymph fishing. Drop a rubber legs in brown/coffee (size 6-10) and trail a rainbow warrior, flash back pheasant tail, or a lightning bug.

The Green:
The recent cooler weather and rain have turned the Rio Verde back on! Our guides have been getting great results with chernobyls in gold and orange (size 6-12). The streamer bite has slowed considerably throughout the day, however, try very early in the morning and right at dusk. Big, dark colors, and ugly streamers are working the best!

The South Fork of the Snake:
The Salmon flies have finally reached section 1 and the bite is ON! The boat hatch will be heavy as the we reach the tail end of the Salmon fly madness. PMD fishing has been extremely productive through the riffles and side channels. Below section 1 the fishing has slowed a tad due to the fish being STUFFED from the big bugs. On the plus side the flows out of Palisades have dropped 1000 cfs over the past two days.

We’re experiencing a super Fall.  Chubby Chernobyls, Parachute Adams, small nymphs (pheasant tails and copper johns) and streamers are producing beautiful and abundant fish.  Get that fishing or scenic trip in before October when temps may be frigid.  Foliage is at peak for a double value!  Call us today to book your trip with Grand Fishing Adventures. 307-734-9684

Bruce Bristol, while his wife was fish flying…

The bugs are hatching; the kids are back to school; the leaves are turning color; and, why aren’t you on the river?  September is one of the best months to fish the Snake River.  With fewer boats, there is less pressure on the water.  The Snake River Cutty will be looking for your fly in order to bulk up for the cooler weather.  Chernobyl ants and PMDs are the ticket.  We’re also throwing BWOs.

The weather forecast is looking delightful with temperatures in the mid-70’s and lots of sun.  If fishing is not your thing, go along for the ride and check out the majestic scenery of Jackson Hole.  Book either a private scenic float or a fly fishing trip for any level angler.  We will provide instruction for the novice, or simply guide the expert to the best holes.  Give us a call today to book a trip 307-734-9684.

We’ve caught some of our biggest fish in the rain.  Our guides have rain gear on their boats for the higher moisture periods.  Just look at the beauty, above, that one of our anglers caught while braving the weather.  You’ll also have more dramatic views with some cloud cover.  You too may get in on the action floating beneath the majestic Teton Mountain Range.  Our guides are taking trips out on the Snake and the reports are very positive. Chubby Chernobyl’s with various droppers and dry flies are working.  Swing into the shop and we will get you set up with the appropriate patterns for a day on the Snake.
Don’t forget, Grand Fishing Adventures has the exclusive rod rights on the spring creeks of the Snake River Ranch.  If stalking large Snake River Cutthroat on small spring creeks is your thing we have the product for you.  Fish Creek and Lake Creek are fishing great right now!
Give us a call at the shop (307-734-9684), or just stop by and we’ll set you up with one of our experienced guides for a great day on the water.  ! 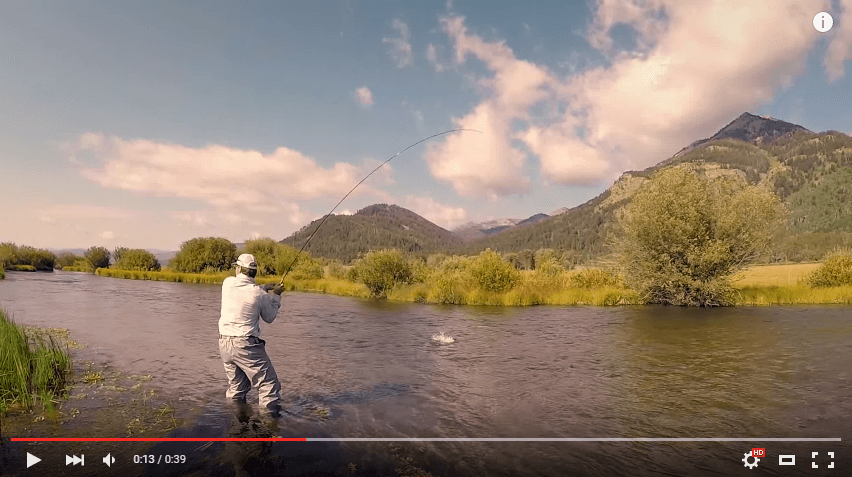